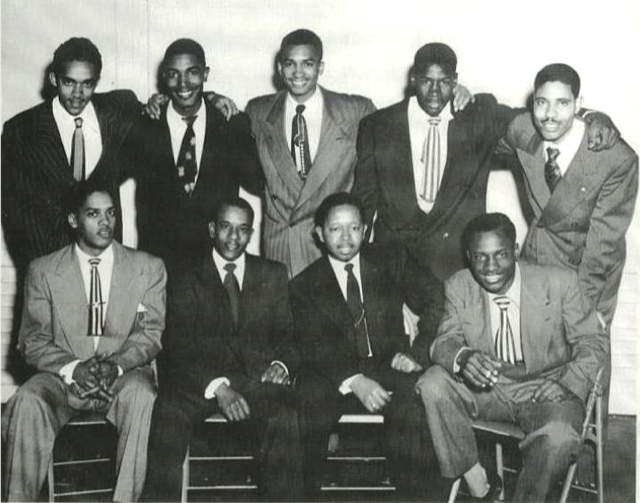 C. Roger Wilson was Polemarch of Chicago Alumni Association. He had lived in Carbondale and was there visiting relatives in the summer of 1949. He met Emmanuel Duncan at the Spillway. Duncan told Wilson he just got out the service, but before the Army he had attended the University of Illinois and was a Kappa. Wilson told Duncan he also went to U of I and he was also a Kappa made at Beta. So an immediate bond struck up.

Wilson asked Duncan if he would start a chapter of Kappas at SIU. Wilson told Duncan if he started a Kappa chapter at SIU the Chicago Alumni would back him. He told Duncan to pick candidates who had good character and who could formulate a good chapter. Wilson trusted Duncan and Duncan relished the challenge.

Doc Russell was the basketball coach at Crispus Attucks School in Carbondale as well as a Kappa. Russell knew SIU students who had graduated from Attucks and which ones were disciplined hard workers with good character. So Emmanuel Duncan sought Russell’s advice for evaluating candidates as well as advice in starting the chapter.

The first student Duncan recruited was Harold Attyberry Sr. from St. Louis. He was a sophomore but had a relative who was a Kappa. So Atttyberry was very gung ho about starting a chapter. He was very aggressive and was out all the time trying to recruit brothers.

After the group started to grow they couldn’t have a bunch of Black guys hanging out in front of the library. So they went into town to meet. They recruited Robert O. French who lived in Carbondale. French’s parents had died and left him the family house in the 800 block of North Marion Street. Instead of talking at the library Duncan and the guys he recruited began meeting at French’s house on Fridays.

They recruited Raymond Bowers who was living at 422 South Marion. They finally said, “Let’s organize.” They named the group, “Kappa Interest Group,” or KIG. They became known as the KIGs. Duncan preferred the name KIG to Scrollers because he wanted to continue to drum the word Kappa into them.

After several months of activity on December 18, 1949 Emmanuel Duncan mailed a petition requesting a new chapter to the Grand Chapter Board of Directors of Kappa Alpha Psi. It was signed by ten SIU students wanting to charter the chapter. The request was accepted.

Elections were held the next day at Rock Hill Baptist Church under Pastor Luke W. Mingo. Rock Hill was on the northeast side of Carbondale, on the corner of Marion and Monroe Streets. Emmanuel Duncan was elected Polemarch, John Robinson was elected Vice Polemarch, Harold Attyberry Senior was elected Keeper of Records and Lyndall Locke was elected Strategus. The first Chapter Advisor was Joseph D. Russell, the Kappa in Carbondale who helped the chapter get started. Fraternity meetings were held at Brother French’s house on Marion Street.

Early on the focus of chapter meetings were getting good grades. The brothers had a strong drive to be the best and that included making better grades than other fraternities and sororities. Grades for every fraternity were posted in the Daily Egyptian newspaper every quarter. The fraternity with the highest GPA at the end of each quarter received a rotating trophy. If you had the highest GPA for three straight quarters you kept the trophy.

Throughout the 1950s and 1960s Kappas consistently had the highest grades of all the white and African American fraternities. In 1962 Gamma Upsilon had won the Scholarship Trophy eleven out of twelve quarters.

By the 1960s Gamma Upsilon was the largest undergraduate chapter in the country, with a membership of over 100 brothers.

[1] Lyndall Locke is not in the photograph of charter members in the Morris Library at Southern Illinois University donated by Robert French, and has not been previously listed as a charter member. Lyndall Locke signed the petition to start the chapter in 1949 and is listed on Grand Chapter’s roll of Gamma Upsilon initiates in March 1950. Locke may have missed the photo because he was a senior and had left school or because Locke had a baby coming. The baby was two or three weeks late. Locke was sometimes late for meetings or activities because he thought the baby was coming. It has been stated previously that there were nine charter members of Gamma Upsilon. There were actually nine inducted on March 4, 1950. One of the charter members, Emmanuel Duncan, was already a Kappa, having been initiated at Beta before coming to SIU.