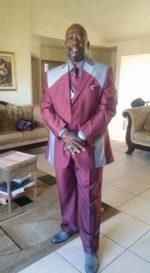 I was a Scoller for approximately 9 weeks at the Gamma Upsilon Chapter in 1973/74. The line that I was on was The K.S. Kriminals. We were on a quarter system at which time I failed to make grades in Earth Science and Political Government. I quit school due to the birth of my daughter , at which time I started my career in the Illinois Dept of Corrections. I worked 32 years in Corrections, 3 years in Illinois and 29 years in California. Upon completion of paying my dues to protect and serve, I retired and returned to school in 2009 at Ashford University and earned my degree in Administration of Justice/ Correctional Services and graduated in 2011. As my Fraternal journey began in 1973, I was blessed to complete what I started in 1973 at the Mighty Gamma Upsilon Chapter to finish strong at the Carlsbad Laguna Temecula Alumni Chapter on June 28 , 2014, at 1043;23 seconds.
I serve as a Senior Pastor at The Church of Yeshua Ha Mashiach (Hebrew for Jesus the Messiah). Visit my website at www. Coyhm.org. I served as a San Diego Police Chaplain for 16 years, now
I serve on the San Diego Board of Police Commisson and Community Relations.
I serve as the Vice Polemarch, the chapter Chaplain, MTA Chairman and Historian for the Carlsbad Laguna Temecula Alumni Chapter of Kappa Alpha Psi Fraternity Inc and Strategus for the San Diego Alumni Chapter. After being 44 years on the Desert, “It’s Good to be a Kappa” “I say YO and Up In Here”